Dragons, Demons and Deities: Folklore of the Kyoto by the Sea Area

Kyoto by the Sea

Japan has a wealth of legends and folktales, which often enriches the experience of travelling through certain regions. Many are associated with certain areas, such as Okayama prefecture’s Momotaro (Peach Boy), but more often than not most areas have their own assortment of local folklore.

Naturally, northern Kyoto prefecture, especially the area by the sea, has its own tales to tell. The stories below are an introduction to the myths and legends associated with important locations. Think about them the next time you visit any of the places below––they may just make your travels that much more special!

Located in the scenic region of northern Kyoto, Amanohashidate is a 3.6km-long sandbar spanning the mouth of Miyazu Bay. Densely forested with thousands of pine trees, and silhouetted by white sand beaches, the picturesque sandbar has inspired Japanese scholars, artists, and landscape garden designers for centuries, and is today considered one of the Three Scenic Views of Japan.

The myth associated with Amanohashidate is central to this fascination. Japan’s creation myth centres on the goddess Izanami and the god Izanagi, whose divine coupling led to the birth of this land. The Tango Fudoki, early historical chronicles of the Tango region, tells a story of how Izanagi used a ladder, or the ‘floating bridge of heaven’ (Ama-no-Ukihashi), to visit Izanami on earth. It is unclear whether he tripped over the ladder, or whether it simply toppled over, but it fell out of the sky into the sea, becoming Amanohashidate. The minor detail of their being siblings notwithstanding, this folk tale is how the sandbar has come to be known as an auspicious place for lovers. 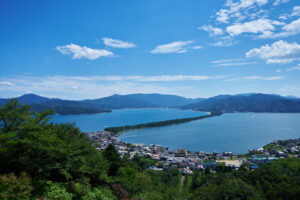 Amanohashidate is one of the “Three Most Famous Views in Japan.” This natural land bridge is described in legend as having been created by the deity Izanagi-no-mikoto as a path from the heavens to vis …

Besides walking along the sandbar, visitors usually partake in mata-nozoki: looking at Amanohashidate upside-down from between your legs. Heaven and earth are inverted, and the sandbar transforms into a magnificent dragon snaking through the sky. This is known as hiryūkan, or ‘view of the flying dragon.’ Amanohashidate View Land and Kasamatsu Park both offer excellent views of the sandbar as well as the bay. 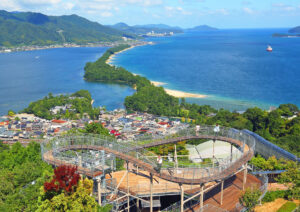 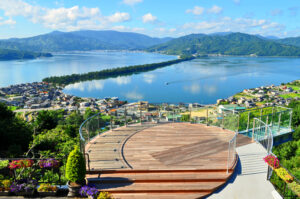 This is one of the two overlooks perfect for viewing Amanohashidate, one of Japan’s Three Scenic Views. The park is located halfway between Motoise Kono Shrine and Nariai-ji Temple, and is accessible …

Near the northern end of Amanohashidate en route to the Kasamatsu Park viewpoint stands one of the region’s most important shrines––Motoise Kono Shrine. Perhaps in part thanks to its location, it has long been associated with the ocean; today, the main deity enshrined there is Umisachi-hiko (or Hoderi-no-mikoto), the deity of the sea.

However, it is notable for having once enshrined Amaterasu, the goddess of the sun in Shinto mythology and one of creator god Izanagi’s offspring, prior to being enshrined at Ise Grand Shrine in Mie prefecture. Legend also suggests that in earlier times, Toyouke-Ōkami (or ‘Toyouke-bime-no-kami’), the goddess of agriculture, was also enshrined here. Prior to this, Toyouke-Ōmikami had been the main deity at Hinumanai Shrine, mentioned in the next entry; eventually, she was called to Ise by Amaterasu herself.

The shrine’s name, ‘Motoise’ or ‘Origin of Ise,’ is therefore a somewhat pointed reference to its glorious past. Although photography is not allowed on Motoise’s shrine grounds, visitors who have also been to Ise will note the architectural (and general visual) similarities with said shrine, such as the ten katsuogi roof logs and suedama jewel-shaped decorations on its railings.

It would be difficult to understate the importance of rice in Japanese culture. Whether used as currency or acting as status symbol, it was the very basis upon which the wheels of Japan’s economy spun throughout most of the last two thousand-odd years. So it is little surprise that there should be folk tales of how rice cultivation came to be in this country.

Tsuki no Waden, an unassuming-looking paddy field of about 7 square metres near Hinumanai Shrine in Kyotango City, is the place associated with this story. While no official translations exist, its name means something like ‘Moon-Shaped Rice Field,’ a reference to its semi-circular shape. The Engishiki (a 10th century book about laws and customs) calls it ‘Taniwa,’ or literally ‘the garden of rice paddies.’

According to the Tango Kujiki (‘Old Tales from the Tango Region’), this is supposedly where Toyouke-Ōmikami first soaked rice seeds and planted them, later presenting the harvested crop to Amaterasu. Its association with the divine and supernatural continued for a long time: although the field was used to grow rice during the Edo period, the local lords avoided imposing annual tributes on the harvest here due to a supposed ‘curse.’

It is likely that this is not its original location; the field was relocated sometime during the 20th century due to land consolidation, and eventually abandoned. However, the city of Kyotango and the district of Nika spearheaded the reconstruction of Tsuki no Waden in 2013, to celebrate the folk history of this area.

Similar folktales and locations do exist in other regions of Japan, crediting other deities for the origins of rice cultivation. But in all likelihood, rice was brought over by people who travelled across the sea from China and eventually settled in Japan!

A short distance outside the little fishing village of Ine is Urashima Shrine, which is associated with the tale of Urashimako. This is one of Japan’s most famous folktales, and is a popular children’s story. Minor details vary in the telling—for instance, most versions refer to him as Urashima Tarō—but the general story goes something like this:

There was once a young fisherman by the name of Urashimako, who unexpectedly caught a turtle while out fishing at sea. He fell asleep, and when he came to, discovered that the turtle had transformed into Otohime, daughter of Ryūjin (‘Dragon God’), the Emperor of the Sea. Urashimako wound up spending three years with the beautiful princess.

However, three years was a long time. Urashimako wanted to see his ailing mother after such a long while, and asked if he could leave the ocean. The princess gave him a parting gift: a tamatebako, a mysterious Pandora’s box which would protect him from harm, but which he could never open.

On returning to dry land, he discovered that his home had vanished, and that the world had changed. Passing locals told him that several generations ago––300 years, in many versions of the tale––a man by the name of Urashimako had disappeared at sea, never to be seen again. Struck by grief and forgetting the princess’s warning, he opened the box. Some versions of the tale say he found himself transformed into an old man; others say he vanished in a puff of smoke.

At the foot of Mt. Oe in Fukuchiyama City is the Japan Oni Cultural Museum, which is dedicated to oni –– most easily understood as the ‘demons’ or ‘ogres’ of Japanese folklore. Mt. Oe was believed to be the home of many oni, and as such it’s only fitting that there’s an entire museum about them right there. A dead giveaway to the museum’s contents is the striking Heisei no Oni, a giant 5-metre onigawara (demon-shaped roof tile) weighing a whopping 10 tonnes, standing in front of the building.

The museum exhibits include many oni-related local legends and folktales, as well as fantastic displays of oni masks and onigawara. 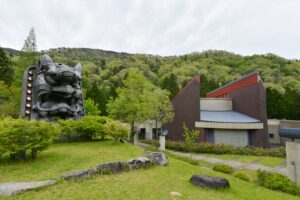 The Japan Oni Cultural Museum is appropriately located at the foot of the Oeyama mountain range, home to the most notorious “oni” (demon or ogre) in Japan, Shuten Doji. The museum explains local folkl …

This legend dates back to the reign of Emperor Ichijo during the mid-Heian period (794–1185). It was a time of social unrest, and on top of this, many young women in Kyoto began vanishing under mysterious circumstances. Using the services of a famous diviner, the imperial court discovered that Shuten-dōji, the oni king of Mt. Oe, was responsible for the kidnappings.

In response, the Emperor dispatched the military commander Minamoto no Raikō (also known as Minamoto no Yorimitsu) and Fujiwara no Hōshō (Fuyjiwara no Yasumasa), along with Raikō’s four legendary lieutenants, to exterminate Shuten-dōji. En route to Mt. Oe, the party encountered four deities, from whom they received some special sake, and on whose recommendation they disguised themselves as yamabushi (mountain priests). They also met an old woman, who told them of the grisly fate befalling these young women––the oni slaughtered them, eating their flesh and drinking their blood.

In their priestly disguises, the warriors persuaded the oni to offer them lodging for the night. The demon king Shuten-dōji drank sake with them, and told them of his fondness for sake. Raikō then poured Shuten-dōji the sake gifted to them by the deities, incapacitating him. The warriors slew the demon king, slicing off his head, and brought it back to Kyoto as a trophy along with the rescued women.

Local Fukuchiyama sources note that the Shuten-dōji myth bears a few similarities to an earlier tale describing the demon conquests of Prince Maroko; he was the half-brother of Prince Shotoku, a politician who lived between 574 and 622 AD. It is possible that these tales had some influence in shaping the myth of Shuten-dōji.

・The Legend of Prince Hikoimasu

According to the Tango Fudoki Zanke (‘The Incomplete Tales of the Tango Region’), there once lived a certain Prince Hikoimasu, who was the younger stepbrother of Emperor Sujin, the 10th ruler of Japan. Dispatched to the Tamba region as one of four commanders sent to conquer more regions in Japan, Prince Hikoimasu is enshrined in legend for his defeat of the Tsuchigumo (‘earth spiders’) on Mt. Aoba.

While there are many different accounts of this feat in various towns and villages, the version told in Kawamori-go (located in Oe, Fukuchiyama) is the most detailed. Following orders from the emperor, Prince Hikoimasu led a force to drive out and vanquish the spiders Kugamimi-no-mikasa and Hikime, who had been terrorizing the villagers in the area.

The prince gave chase, pursuing the two all the way to Arimichi-go, and the bloody battle resulted in the area being named ‘Field of Blood’ (present-day Sembara). He slew Hikime, but Kugamimi-no-mikasa managed to escape by fleeing across the river. The prince’s army lined up their shields in order to defend the river; this is how Kawamori-go, whose characters mean ‘protecting the river,’ gained its name.

The spider fled downstream along the Yura River. Prince Hikoimasu spied a boat on the river, and jumped on to pursue the spider, but lost track of it at Yura Port. When he used a stone to divine the spider’s location, the prince found that it had fled to Mt. Oe in Yosa. The place where he picked up the stone was named Ishiura (‘Stone Inlet’) and the boat he used was enshrined at the district of Tatehara, which is now said to be the origins of the local Funado-no-kami, a deity offering protection against disasters and malicious spirits.

What did you think of these folktales? These stories only begin to scratch the surface of northern Kyoto’s rich culture and history. We hope they inspire a trip or two to this part of Kyoto, and help you discover more of what it has to offer!