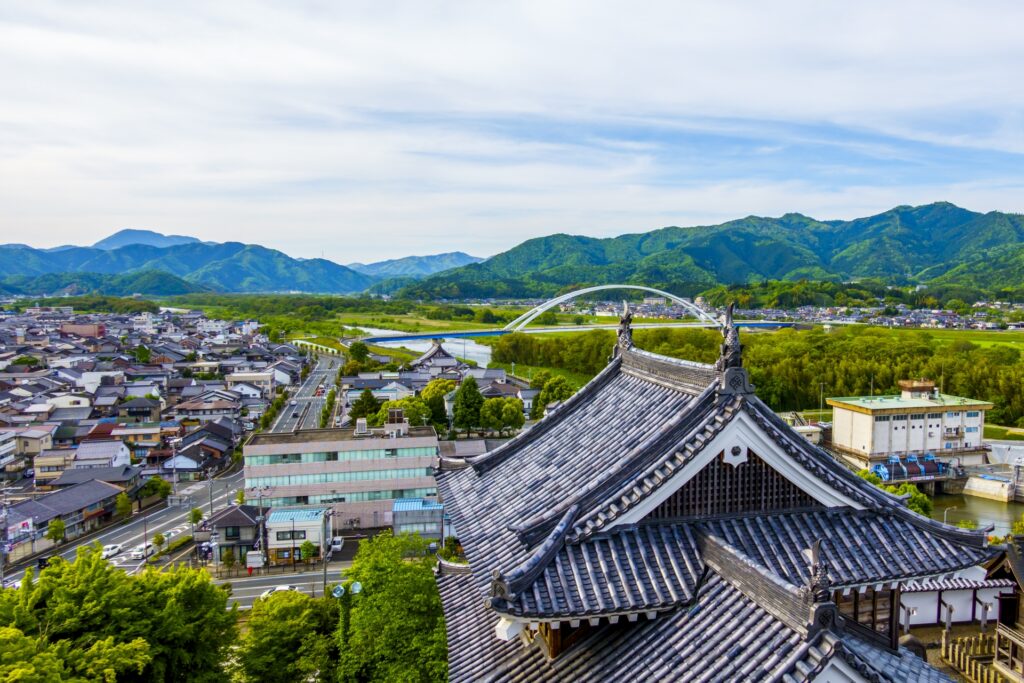 Kyoto by the Sea Woodland Kyoto

Quieter and calmer than the bustle of Kyoto City one hour to the southeast, Fukuchiyama is a peaceful corner of Japan with some wonderful sights to see. Steeped in tradition, culture and local life, its calm existence in the Tamba area today traces all the way back to the 16th century General Akechi Mitsuhide, who transformed Fukuchiyama into a prospering castle town. Today, with a visit to Fukuchiyama in northern Kyoto Prefecture, you can discover historical architecture at various shrines and Fukuchiyama Castle, unique accommodation experiences with local guesthouses, and head on a tour of the town’s best hotspots for local cuisine.

This northern Kyoto gem is a wonderful getaway with lots to offer—did we mention it’s also known for its delicious sweets? Let’s take a day through some of the sights and flavors of Fukuchiyama. To start, let’s head to the city’s symbol, historic Fukuchiyama Castle.

The iconic story of Akechi Mitsuhide and Fukuchiyama Castle

Mitsuhide’s legacy still remains strong today, especially through Fukuchiyama Castle. The most famous attraction in this town, Fukuchiyama Castle, was rebuilt by Mitsuhide in 1579. To fully appreciate its importance, we must briefly touch upon the Honno-ji Incident — a story that everyone in Japan knows, such was its historical significance. Mitsuhide forced the ruthless daimyo (war lord) Oda Nobunaga to commit seppukku (ritual suicide), bringing an end to Nobunaga’s fierce efforts to unify Japan. Although this event gave Mitsuhide a reputation as a traitor, the people of Fukuchiyama actually adored him as a lord who laid down good politics, and brought the town economic prosperity.

Aside from this incredible connection to Japan’s political past drawing new visitors each year, the castle also boasts excellent views across the Yura River and is home to the Sato Taisei Memorial Museum. The museum houses many of the Japanese painter’s works as well as crafts and historical exhibits about the local Tamba area. Explore the grounds further to find Toyoiwa-no-i, the deepest castle well in all of Japan. 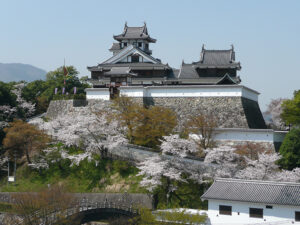 Before Fukuchiyama Castle, there was Yokoyama Castle, a fortress of the Yokoyama, the local ruling family. Akechi Mitsuhide, the samurai who subjugated Tamba, rebuilt the fortress using state-of-the-a …

Visit some of Japan’s oldest torii gates and shrines

Further history and tradition can be found at Motoise Naiku. This ancient shrine is one of the locations where Amaterasu, the ancestral god of the imperial family and the Shinto goddess of the sun, was enshrined before moving to the Ise Grand Shrine in Mie Prefecture. According to Japanese folklore, in the Age of Gods, Amaterasu’s jealous brother, Susano-o, went into a rage, damaging his sister’s rice fields, attacking a heavenly horse, and killing one of her weaving maidens. Distraught by his actions, Amaterasu hid in a cave, taking the world’s sunlight with her. Various gods attempted different tactics to coax her back out, but failed. Eventually, the goddess of dance, Ame-no-Uzume, performed a comedic dance outside the cave. The show was so hilarious that the deities began laughing. Curious, Amaterasu inched out of the cave, at which point Takijarao, a particularly strong god, pulled her out into the outside, thus restoring light to the world.

Though tourists in Japan are most familiar with the sight of brilliant-red torii gates, the humbly constructed gate at Motoise Naiku Shrine is one of the most primitive still in existence. Made of raw cedar trunks, it is an example of the rustic architectural style of ancient times — the gate’s simplicity holds surprising power.

Located close by in a lush ravine, Amanoiwato Shrine is a popular location for hikers to stop by as they explore nearby forest trails, and also shares a connection to Amaterasu. Perched on the side of a boulder near a mountain stream, it is a highly atmospheric shrine that feels both sacred and relaxing. Some versions of the legend of Amaterasu even say it was under this very rock that the goddess hid away from the world. 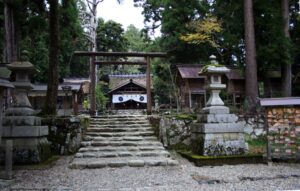 This ancient shrine is one of the locations at which Amaterasu, the Shinto Goddess of the Sun, was enshrined before moving to Ise-jingu Grand Shrine in Mie Prefecture. In fact, this shrine predates Is …

Stretching out at Sandan-ike Park

While both shrines are surrounded by lush nature, Sandan-ike Park is another spot in Fukuchiyama to immerse yourself in the outdoors, stretch out and enjoy the highlights of the four seasons all-year-round.

Cherry blossom and azalea grace the spacious parkland in the spring and crimson and carmine leaves in fall. Families in particular will love the large prairie-like playing field, zoo, lake, playground and Children’s Science Museum.

Aside from Mitsuhide, Fukuchiyama is also famous for its sweets. Tamba’s climate lends itself well to producing the “king” of Japan’s chestnuts: Tamba chestnuts. They are especially famous for their impressively large kernels and mellow sweetness. The perfect place to go for this taste of traditional Kyoto is Adachi Otoemon. One of Kyoto Prefecture’s Tangible Cultural Properties and the former home of the Matsumura family, the shop building is a wonderful example of architecture from the Meiji (1868-1912) and Taisho (1912-1926) eras, and the quality of its chestnut treats are unbeatable.

Crafting chestnut dessert terrines, pound cakes and other sweet treats like cream puffs and gelato, Adachi Otoemon welcomes visitors to savor their famous desserts, but also to peek around the factory to see first-hand how these edible pieces of history are made.

Centuries ago, Tamba chestnuts were given as offerings to feudal lords. Perhaps Nobunaga and Mitsuhide once received these as gifts? Grab some Tamba chestnut treats as omiyage (souvenirs) for your friends in 2022, and for even more choice of omiyage, check out this overview of local stores selling unmissable omiyage in Fukuchiyama. 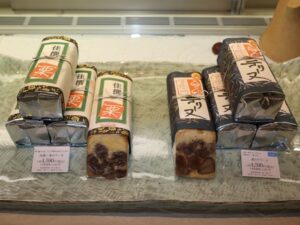 Bringing a more playful, modern twist to Fukuchiyama’s sweet-treat fame is Un.donpuri. Its name, which is a mix of donburi (a rice-bowl dish) and purin (pudding), perfectly describes the cafe’s specialty: photogenic and creative pudding desserts that look like realistic savory dishes including everything from katsudon to ramen, hotpot and beef bowls.

The cafe opens at 11 a.m. and the “donpuri” sell out quickly, so be sure to head there early to grab some yourself and snap some shots for Instagram. 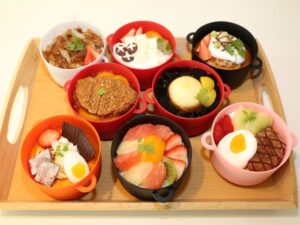 Located in Fukuchiyama City, Un.donpuri is a café known for its for puddings that look amazingly like Japanese cuisine. It has puddings in the form of 11 kinds of dishes: katsudon (fried pork cutlet o …

Rustic meets elegance at Yanagimachi. Traditional wooden latticework and warm, low accent lighting greet you as you enter this renovated machiya townhouse from the Meiji era. Whether for lunch in between sightseeing, or a one-of-a-kind dinner at the end of your day, this is a wonderful location to experience traditional Fukuchiyama dining.

Yanagimachi prides itself on serving up this Fukuchiyama specialty: thinly sliced, locally-sourced duck that’s briefly simmered at the table in a steaming hot pot, together with a generous amount of fresh kujo negi leeks, a Kyoto vegetable. If you’re visiting during lunchtime, opt for the hearty kyojidori oyakodon (chicken and egg rice bowl made with local Fukuchiyama chicken). 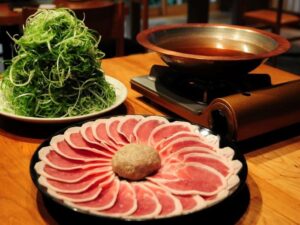 Yanagimachi is a famous restaurant in Fukuchiyama that showcases Fukuchiyama’s specialties of duck and green onion in a dish known as kamosuki (sukiyaki made with duck meat). The restaurant building i …

Make yourself at home at traditional accommodation

Tempted to stay for a weekend in this charming corner of Kyoto? Fukuchiyama has a range of accommodation options to suit any budget, ranging from business hotels to traditional ryokan and more unique stays — like Yakuno House and Furumaya.

A traditional 200-year-old Japanese house, Yakuno House has a new lease of life as a cozy guesthouse. Guests are welcomed to truly make themselves at home — cook in the kitchen, relax in the tatami rooms or hop on one of the bikes to cycle around the area and over to nearby Takeda Castle. This secluded mountain guesthouse makes for a tranquil, rejuvenating stay.

To embrace country life, stay at Furumaya; a traditional family-owned farmhouse where nature and hospitality harmonize throughout all four seasons. The family grows their own produce in the surrounding fields and rice paddies, and guests are welcome to get involved harvesting vegetables, chopping wood, and dining on meals made from the garden’s ingredients.

A unique overnight stay is the perfect way to end your day in Fukuchiyama. The city offers a wonderful, tranquil getaway into deep Kyoto, where you can experience its history in castles, shrines, and even eateries, as well as a twist on the traditional with its marvelous sweets and tasty local dishes.

Fukuchiyama is easy to reach from either Kyoto or Osaka, or from the popular Kinosaki Onsen area in neighboring Hyogo Prefecture.
To reach Fukuchiyama by train, the journey is approximately 1 hour 20 minutes from Kyoto Station on the Hashidate Limited Express Kinosaki, or approximately 2 hours on the JR San’in Line.

If you’re really hoping to get off the beaten path and explore all the locations we’ve shared here and more, you might find it easiest to travel around by car. Cars can be rented close to the station from either Times Car Rental or Toyota Rent-a-Car. If you’d prefer to make your whole journey by car, you can cruise into Fukuchiyama from Kyoto in about two hours.