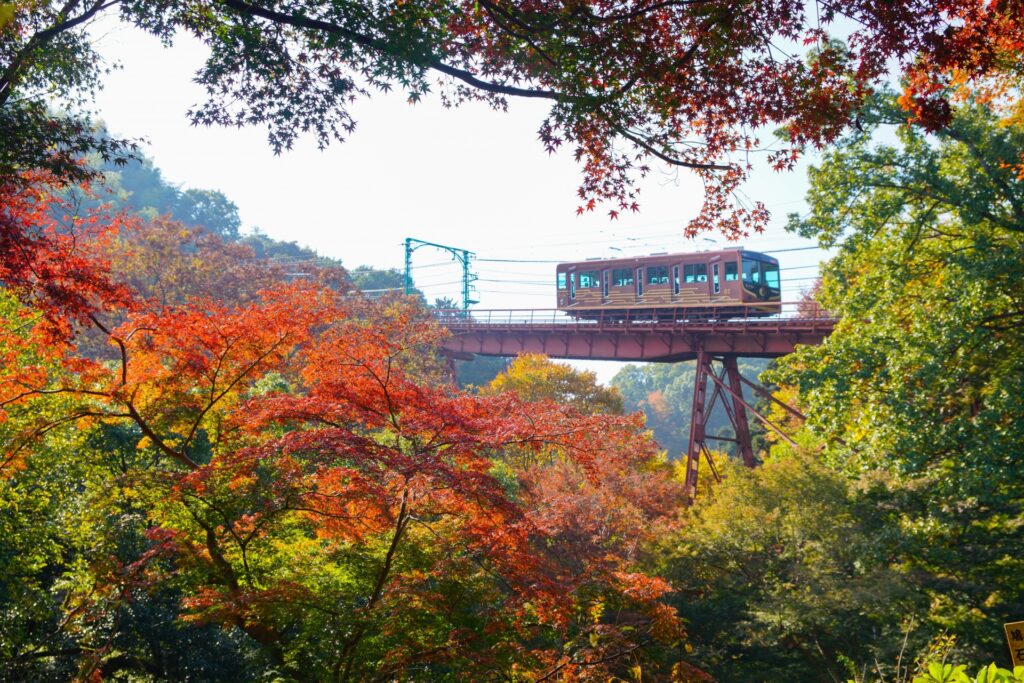 Kyoto and Osaka are both can’t miss destinations in Japan: Osaka with its bustling streets and friendly energy, and Kyoto with its many temples and history as an old capital. The two are both linked by several train lines that make it easy to see much of these Kansai area destinations in a short period of time, but on the hour or so-long train ride between the two, there are some locations you won’t want to miss.

After you’ve explored the lively streets of Osaka, and before you head to locales in Kyoto City, take a stop off on the Keihan Main Line that runs between the two (from Yodoyabashi Station in Osaka to Demachiyanagi Station in Kyoto) to see some of the historical and cultural treasures tucked away in Yawata, in Southern Kyoto. It’s a stop you can make within a half day, or about a few hours, depending on how much you want to see!

Up the hill and above the river

On the Keihan Main Line, get off at Iwashimizu-hachimangu Station (reachable by express and sub-express, or local train). The shrine for which this station is named is an easy first stop: on foot, if you’d like, or if you’d rather skip the hill, you can reach the shrine in three minutes on the Iwashimizu-hachimangu-sando Cable. You can also catch a deal on this ride with one of the Keihan Line’s Kyoto-Osaka sightseeing passes.

Heading up the hillside and through forest and tunnel on the cable car, you’ll be treated to a view of the Yawata area’s unique topography: below are the Katsura, Uji, and Kizu Rivers. The three major waterways join together in Yawata to form the Yodo River, which flows on through Osaka. If you visit Yawata in the springtime, you’ll want to head over to the Sewaritei Embankment, a bit of land between the Uji and Kizu Rivers that’s crowned with a breathtaking tunnel of grand cherry trees under which many people come to picnic during the sakura season. 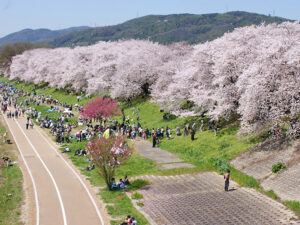 This park is located to the north of Iwashimizu Hachimangu Station on the Keihan Line, just across Goko Bridge. Here, you’ll find a line of cherry blossom trees that extends for about 1.4 kilometers. …

A renowned shrine with ties to East and West

Alighting at the top of the hill, you’ll find the grand complex of 1,200 year-old Iwashimizu Hachimangu Shrine, a National Treasure long considered one of the most important Shinto shrines in Japan. One of the three main shrines in Japan to bear the name “Hachiman,” for the Shinto god of war and protector of Japan and the imperial family, Iwashimizu Hachimangu has connections to some of the most famous samurai and warlords in Japanese history. The powerful Minamoto (also known as the Genji) clan, for example, who went on to found the Kamakura shogunate (1185-1333), considered it their patron god and shrine, and even established a Hachimangu shrine in their capital of Kamakura. Though the Minamoto rose and fell with the end of Japan’s first shogunate, Iwashimizu Hachimangu Shrine remains an important shrine in Japan to this day.

The impressive Main Shrine of the complex is painted in vermillion and gold, with even more vibrantly painted carvings adorning its two-storied gate. The buildings of Iwashimizu Hachimangu have a number of unique features, as one of the oldest and largest remaining examples of the hachiman-zukuri style of shrine architecture. If you’re curious, see here for some of the hidden features of this National Treasure.
When you’ve finished your scavenger hunt to find the motifs hidden in the architecture across the shrine complex, you’ll find that Iwashimizu Hachimangu has one more surprise left in store with a connection that should light up your curiosity. On the shrine grounds is a large stone monument to Thomas Edison, inventor of the lightbulb.

Through a series of unlikely introductions, Edison discovered his lightbulb would burn longer with a filament of bamboo. With bamboo from Iwashimizu Hachimangu Shrine, his lightbulb burned for 1,000 hours. Today, the shrine holds two annual festivals to honor his birth and death. 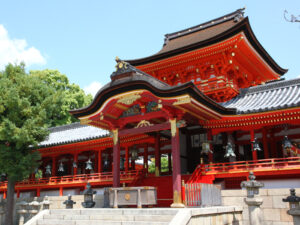 One of the three main shrines bearing the name Hachimangu, Iwashimizu Hachimangu Shrine was dedicated to a god for the protection of the nation in 860. After the main shrine was restored by Oda Nobuna …

Scenery to slip back in time

There are several routes down from the shrine, including the cable car. If you take the shrine road to the back, you’ll come down to where the shrine grounds meet the surrounding neighborhood, but you’ll also find some surprisingly old-fashioned scenery: an arched taiko-style bridge curves charmingly over the little river here. Once flat, after the bridge burned down in the Edo period (1603-1867), it was rebuilt in this arched shape, and nowadays is the site of one ritual of the annual Iwashimizu-sai ceremonies. There are walking paths on both sides of the Ango Bridge, which is listed among the “eight picturesque views of Yawata” (lists of “eight views” have historically been a common style of compiling beautiful and scenic locations in East Asia). It’s a beautiful spot to relax for a moment and take a photo.

Further along the road you’ll pass by the First Gate, a large stone torii gate standing 11 meters tall over the road, indicating an entrance to Iwashimizu Hachimangu Shrine. On the plaque at the gate’s top, the character for “hachi” (八) in “Hachimangu” is written with the shape of two pigeons, divine messengers at this shrine, and a motif you’ll find hidden throughout the grounds.

You’ll also find a place to try some of Yawata’s famous hashirii mochi rice cakes at this historic shop nearby for a sweet and traditional treat! 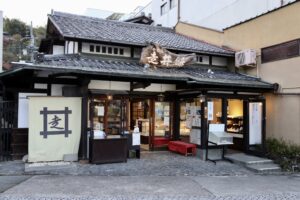 This is an old store that was established over 250 years ago, and it is located in front of Ichi no Torii (the first torii gate) at the foot of Iwashimizu Hachimangu Shrine. The store is famous for it …

A shrine that takes flight

Just across the river here in the station vicinity, you’ll find another shrine, but one with a surprising story behind it. Hiko Jinja Shrine certainly looks very different from its traditional neighbor with its Greco-inspired architecture and metallic torii gate, but there are some other hints to the shrine’s origins as you get closer: a great, twisted metal propellor on display, and a cluster of toy airplanes floating in the basin of water meant for visitors to wash and purify their hands with before entering. Hiko Jinja Shrine was founded in 1915 by Chuhachi Ninomiya, an aviator who designed an aircraft several years before the Wright Brothers. Dedicated to safety in flight, the shrine is still frequently visited by those working in the airline industry today. 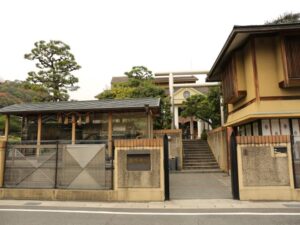 Yawata City’s Hiko Shrine was built by aviation pioneer Chuhachi Ninomiya in 1915, on land where he resided. Ninomiya designed the first aircraft model (the Karasu-gata aircraft model) in Japan. Hiko …

From the station area, you can continue your Yawata adventures: to the Nagare Bridge to the east, or the Shokado Garden and Art Museum to the south. Both can be reached by taxi or bus from Iwashimizu-hachimangu Station, or by rental bicycle if you prefer to stretch your legs. You can easily find bikes to rent at the tourism information center just in front of the station, or at the Shikisai-kan near the Nagare Bridge, or Shokado Garden, introduced below.. For details on exact locations, business hours, and prices, see the Yawata City Sightseeing Website.

Either riding on your bicycle along the Kizu River, or in 15 minutes by bus, you can find the Nagare Bridge (also known as the Kozuya Bridge), one of the longest wooden bridges in Japan. Its name, which literally means, flowing bridge comes from its structure: the Kizu River can flood the plain to impressive heights after a typhoon, during which the bridge is designed not to resist the waters, but to truly go with the flow, and float away with the water. Not entirely, of course: while sections of the walkway are made to float away, you may notice wire cables running along the edge of the bridge to make sure they can easily be reeled back in and set in order again. It’s a bridge that doesn’t fight against the natural conditions of this riverside city, and is made renewed each time instead.

Because of its distinctive look, the bridge has also been used as a filming location for many historical films and TV shows, with many a rogue samurai strutting across its wooden deck.
Just beside the bridge, you can also see a tea field. The fertile soil and mist from the river are partly what makes this area an excellent place for tea cultivation.

This wooden bridge, which extends over the Kizugawa River, is one of the longest in Japan at 356.6m. Its name comes from the fact that its girders are designed to flow in order to reduce resistance during flooding. It has been used frequently as a filming location in historical films.
It is also included in the “A Walk through the 800-year History of Japanese Tea,” certified by the Agency for Cultural Affairs.

From the tea fields, let’s head to a traditional garden with tea houses. If you’re planning to head to the Shokado Garden and Art Museum from the bridge, you might want to take a taxi from the Shikisai-kan nearby. From Iwashimizu-hachimangu Station, though, you can either take a bus or rent a bicycle to travel through town.

A vast garden perfect for strolls and snapshots

20,000 square meters in total, Shokado Garden is the perfect place to experience the beauty of Japan’s traditional gardens in any season: enjoy a tranquil walk through exquisite landscapes with elegant, towering bamboo; flowering plum and cherry trees, and even see three tea rooms and a small, peaceful hermitage where the garden’s namesake, Shokado Shojo, retired later in life. A Buddhist monk who once trained at the Iwashimizu Hachimangu Shrine complex, Shokado Shojo was also a painter, tea ceremony master, and calligrapher. In the museum you can find wonderful exhibits that include his artwork. 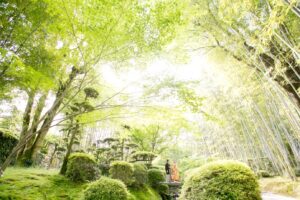 Shokado Garden Art Museum is associated with Shokado Shojo (1584-1639), who was a buddhist priest from Iwashimizu Hachimangu Shrine. Shokado Garden has an area of approximately 20,000㎡, and the Soan …

The adjacent restaurant, Kyoto Kitcho Shokado, also serves an elegant Japanese dish inspired by the monk’s favored boxes. Shokado Bento are served in boxes divided into four, and make for quite a luxurious traditional meal. 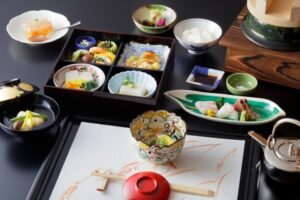 The Shokado Bento packs seasonal flavors into a wooden box, divided into the four sections of the Japanese character for “rice field.” Inspired by the actions of Shokado Shojo, a priest at Iwashimizu …

If you prefer a more casual lunch before you carry on your journey in Osaka or Kyoto, stop by Asahi-ya Sushi, a traditional sushi shop near the station with a history of over 100 years. Enjoy the local Yawata atmosphere over a meal of udon or soba noodles, or the shop’s titular sushi, saba (mackerel) sushi, a Kyoto specialty. It might taste slightly different than sushi you’ve had before, but this lovely, lightly pickled fish has historical roots in the transport of fish from Kyoto’s northern coast to the inland capital, when the long journey required pickling or salting. It’s a flavor that’s endured in Yawata for a century.

When you’ve had your fill, it’s easy to head on to your next destination, but you’d be missing out if you didn’t stop by at least once to explore some of the treasures—natural, historical, and culinary—of this southern Kyoto spot.