The Basics of Uji Tea: Discover 800 years of history and culture 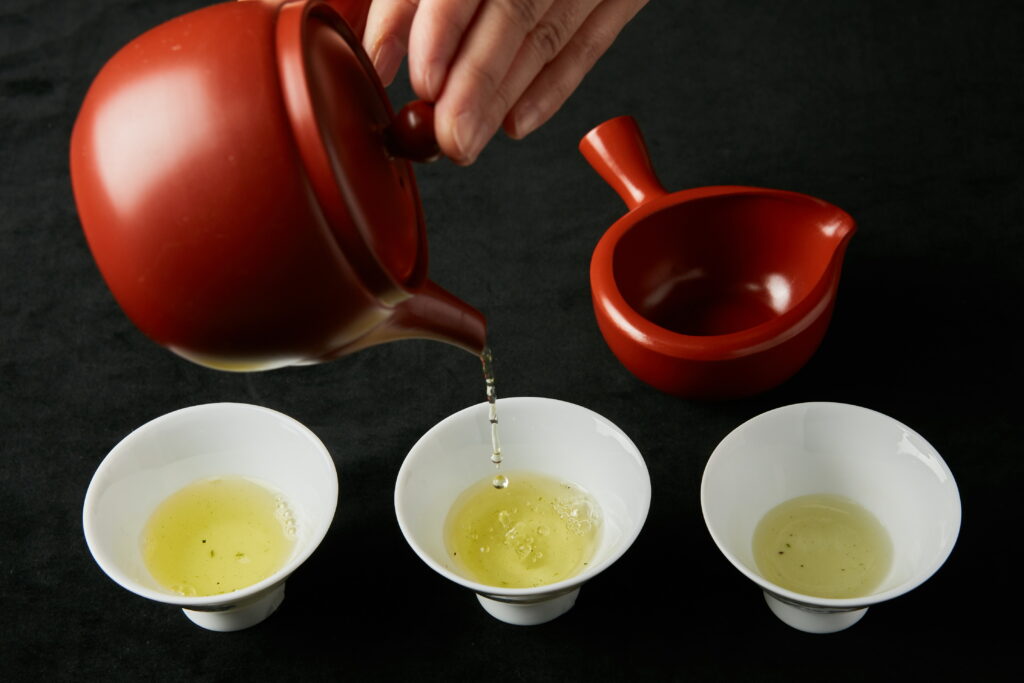 Japan’s beverage of choice for centuries, green tea is now being embraced across the globe for its health and anti-ageing benefits. While green tea is grown in several regions across the country, the southern part of Kyoto Prefecture enjoys particular renown for its long history producing the prestigious Uji tea, widely considered the finest quality tea in Japan.

For visitors, this part of Kyoto offers the opportunity to take in picturesque green tea fields and sample delicious teas nurtured in the local soil. Join us as we look at what makes Uji tea a top-notch drop and unravel some of the history and culture of tea in Kyoto along the way.

What is Japanese tea?

Japanese tea is derived from the leaves of the Tea Camellia, the same plant from which black tea and Chinese teas (oolong and the like) are made. The plant is native to China, where its leaves are said to have been drunk for medicinal purposes for over 5000 years. The difference between the types of teas is in the processing—different levels of oxidization produce different teas. Green tea is made from leaves that have been fired soon after being picked. This arrests oxidization and gives the drink a fresh, leafy scent and balanced sweet and bitter components. Black tea comes from leaves that have been allowed to oxidize—the oxidization process produces the stronger flavor and scent of black tea. Chinese tea is partially oxidized, falling somewhere between green and black varieties.

・Kyoto, the home of Japanese tea

Known for producing top-grade tea, the Yamashiro region in the south of Kyoto Prefecture has an 800-year history of tea cultivation. With Kyoto having been the capital for centuries, tea from the Yamashiro region garnered the favour of the discerning nobility and gourmet-minded citizens in the city, and the farmers were able to hone the product to achieve the superior quality and refined taste we know now. The three major types of Japanese tea—matcha (powdered tea), sencha (the most common type of steeped green tea), and gyokuro (highest-grade steeped green tea)—all originated in Yamashiro, earning the area the honor of being the “motherland” of Japanese tea.

The production methods developed in the Yamashiro region are used in Kyoto and surrounding prefectures. Tea from plants grown in these areas according to the traditional Yamashiro methods is called Uji tea after the birthplace of green tea. Uji tea is prized primarily for its fresh aroma, but also boasts a rich taste and an excellent balance of sweetness, astringency, and umami. The secret behind the flavor is gogumi, or traditional blending techniques handed down from generation to generation of highly skilled blenders. With such a history of tea production in the prefecture, it’s not surprising that Kyoto is also where the iconic tea ceremony blossomed.

The ideal climate for tea cultivation is a relatively warm one with a significant difference between daytime and nighttime temperatures. Morning fog is a plus as it prevents frost from forming on the leaves and helps to produce a moister leaf (moist leaves yield a more aromatic tea). The Yamashiro region ticks all these boxes, especially because of dense morning fog that gathers over the Uji and Kizu Rivers and in the mountains, making it the perfect location to grow delicious tea.

The main Types of Uji tea

Matcha:
Powdered tea made from young shade-grown leaves. The leaves are steamed and dried, and then stone ground into a fine powder which is whisked into hot water to drink. This is what is used in tea ceremonies. The Yamashiro product is the highest quality tea in the country and regularly occupies the top places in industry awards. It boasts a rich aroma and rounded taste.

Gyokuro:
Dubbed the “king of tea”, gyokuro is the highest grade of steeped tea. It’s made from young leaves grown in the shade to increase sweetness and depth of flavor. Kyoto Prefecture is the biggest producer of gyokuro in the country. Leaves from Kyotanabe in the Yamashiro region are especially good quality.

Sencha:
The most common type of steeped tea in Japan. It’s made from young leaves grown in open-air tea fields, which are steamed and then kneaded while drying. Sencha has a fresh and pleasingly astringent taste.

Hojicha:
Sencha that has been further pan-roasted to enhance the aroma. It makes a brown-colored brew that is lower in caffeine than green teas

The History of Uji tea

Now that we’ve covered the basics, let’s dig a little deeper to help you get the most out of a visit to the tea fields.

The 13th century is when the custom of drinking tea took off in Japan. It started with Eisai, a monk who journeyed to China to study and brought some tea plant seeds back with him to Japan (he was also responsible for introducing Zen Buddhism into Japan). Eisai produced writings on tea cultivation methods and espoused the purported medicinal properties of tea such the ability to boost energy, improve digestion, relive hangover symptoms, and prolong lifespan. He shared the seeds with a priest Myoe of Kozan-ji temple in Kyoto, who began to cultivate the plants there and eventually transplanted some seedlings to Uji. Thus began the region’s history of tea production.

The tea that was consumed at the time was not steeped tea, but something akin to today’s matcha. Apparently, it was popular among Buddhist monks who found it handy for fighting drowsiness through lengthy meditation sessions!

The aristocrats and statesmen of Kyoto, the capital at the time, were known for their discerning tastes. They developed a penchant for tea from Uji, so much so that the ruling Ashikaga shogunate in the 15th century declared Uji tea the best in the country. Seven new tea plantations were established by governmental order, one of which continues to produce tea to this day in Uji.

In the 16th century a revolutionary new method of producing higher quality leaves emerged. Called shade growing, the technique involves limiting the amount of sunlight the plants receive. Sunscreens are built over the plants after new buds sprout to shade them for a given number of days before harvest. This arrests the chemical process by which the umami component, theanine,
turns into astringent catechin. Matcha was now smoother tasting and deeper in color.

This era is also when the tea ceremony was developed. It elevated the act of drinking tea into a form of culture that fuses the mental discipline of Zen with quintessentially Japanese aesthetics and spirituality. A bowl of tea became something over which a host and guests could spend time communing and deepening their connections with each other. We also see tea drinking emerging as a form of relaxation for samurai around this time, which was a period of constant civil wars and upheaval in Japan. While enjoying tea had already been something of a status symbol for warriors for some time, it now also served as an escape from the rigors of war.

In the Edo period—a period starting in the early 17th century and spanning approximately 260 years of Tokugawa shogunate rule—commerce thrived under political unity and stability. Uji tea retained its favored status even after the center of government was moved from Kyoto to Edo (present day Tokyo), and a grand annual “tea jar procession” delivered the Shogun’s supply of Uji matcha to the capital.

This period in history also saw further developments in how tea was prepared. A Chinese-born Buddhist monk, Ingen, introduced the concept of sencha, or brewing tea (rather than mixing powdered leaves with water as had been the practice thitherto) to Japan. Innovative Uji tea grower Nagatani Soen devised a technique of steaming the leaves and then hand-rolling them during the drying process, which remains the standard way of making sencha today. Leaves processed in this way produce a deliciously aromatic and brightly colored brew. 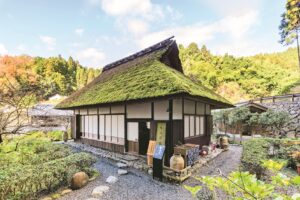 This is the birthplace of Nagatani Souen (reconstructed in 1960), who built the foundations of Japanese tea leaf preparation through his development and popularization of the “Aosei Sencha Method” in …

As the modernization of Japan progressed in the late 19th century, soaring demand for green tea overseas spurred rapid expansion of the Japanese tea industry. The mountains south of Uji were cleared for new hillside plantations, shaping the distinctive landscape of tea fields that appear to reach up into the sky.

Today, matcha is riding a global wave of popularity, being infused in everything from sweets to energy drinks and more. With scientific evidence for the anti-bacterial, anti-viral and relaxational effects of tea leaves, we’re waking up to green tea’s potential as a superfood. In the Yamashiro region, organic tea plantations are cropping up and local establishments are offering green tea beer, tea and food pairing, and host of other novel ways to enjoy green tea.

Next time you’re in Kyoto city, why not go a little further afield and visit the Yamashiro area? The lush fields and tea-scented breeze will refresh your soul as you soak in centuries of rich history and sample the new offerings in the home of Japanese tea. 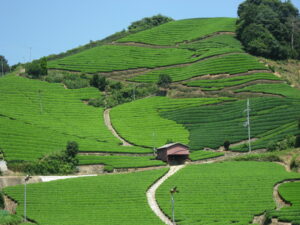 These tea fields, known as the first scenic property designated by Kyoto Prefecture, are also registered as a Japanese heritage site. The tea fields spread out across the steep hillside, in a sight yo …

If you want to learn about Uji tea and the culture and history of Uji, this is the place to start. This history-filled park is located at the center of several historical locations, linking the Uji …

Where and when to go

If you’re planning to visit tea plantations by public transport, Ujitawara and Wazuka are the best options. Ujitawara is about 35 minutes by bus from JR Uji station, and Wazuka is about 20 minutes by bus from JR Kamo station. Some plantations offer tours in English or have overseas interns on staff. If you’re interested in experiencing a tea ceremony or sampling food and sweets made with green tea, head to Uji city.

The tea plant is evergreen so the scenery can be enjoyed year-round. The new crop of tea for the year becomes available in May and is especially fragrant and bursting with taste. Keep in mind that the tea fields are private property. Please do not enter without permission.