Mt. Tennozan: A Historic Hike on the Edge of Kyoto

Just southwest of Kyoto City, the town of Oyamazaki offers visitors a popular hiking spot perfect for travelers seeking a combination of nature and history. The short journey up Mount Tennozan is perfect for a half day adventure. Read on to find out all about this hidden gem on the outskirts of Kyoto.

Tennozan: A Turning Point for Japan

Standing at 270m (890 ft), Mount Tennozan overlooks the narrow plain between Kyoto and Osaka. At the height of the age of samurai, it played an important role in Japanese history. A pivotal battle was fought here that set the stage for the nation as it entered the pre-modern era.

In 1582, the powerful warlord Oda Nobunaga was assassinated in Kyoto by one of his samurai followers, Akechi Mitsuhide. Nobunaga had been close to conquering all of Japan under his banner, and his death left a power vacuum that Mitsuhide proved incapable of seizing for himself.

This is where the charismatic samurai Toyotomi Hideyoshi decided to step up and avenge his lord Nobunaga. Racing from western Japan with an army in tow, Hideyoshi engaged Mitsuhide on the plains below Tennozan. The Battle of Yamazaki ended with the assassin’s defeat, in part due to Hideyoshi’s strategic use of the mountain’s geography for his base.

Hideyoshi would go on to establish a short but memorable reign and become one of Japan’s most important leaders. The era of stability and prosperity that he and his successor would usher in can be traced back to the decisive victory at the foot of Tennozan.

A stone marker indicates the battlefield today, but all other traces of the conflict have long faded from the landscape. With the story of the battle in mind, a hike up the mountain is an enjoyable way to relive one of the most momentous encounters of the samurai era.

The journey up the mountain begins at JR Yamazaki Station, where a short walk brings visitors to a signpost and stone column marking the street to turn on. From here, it’s a five-minute ascent through a hillside residential area to the front gate of Hoshaku-ji Temple.

Passing through the gaze of the two large guardian statues brings visitors into the main temple grounds. Hoshaku-ji is a pleasantly quiet complex on a small plateau where Hideyoshi established his camp before the fateful battle. The wooden pagoda here was built to celebrate his victory, and legend has it that it was brought to the site in pieces and assembled in only one night.

Elsewhere in Hoshaku-ji are buildings that hikers can enter and see the religious environments up close. Of particular note is the large wooden statue of Enma, the king of hell who decides the fates of departed souls. Surrounded by his four helpers, he’s a stirring sight. Perhaps his fierceness will get the blood pumping for the hike that begins just behind Enma’s building. 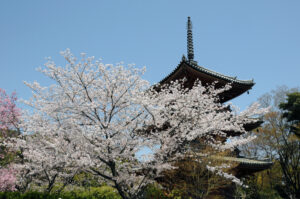 Hoshakuji Temple is located on the south side of Mt. Tenno (270m) near Oyamazaki Town on the border between Kyoto and Osaka Prefectures. The temple is beautiful year round with cherry blossoms in spri …

The total ascent to the top of Tennozan is approximately 40 minutes, with the first quarter being the most challenging. Rough stone steps and tree roots provide a workout for the initial ten minutes that it takes to reach the first lookout area called Aokibadani. Just remember: if Hideyoshi’s samurai soldiers could make this trek in full samurai armor, you can certainly do it in a good pair of shoes and comfortable clothing!

This first viewpoint offers a wonderful view to the southwest, with downtown Osaka in the distance. The tallest structure on the horizon is Abe no Harukas, Japan’s highest office building.

Hikers can take a moment here to admire the first of six illustrated ceramic panels on display. These artworks tell the story of the Battle of Yamazaki in vivid detail using traditional styles and colors.

The mountain path leads upward to the second viewpoint, a wide clearing on the trail crowned by a huge stone torii gate. To the right is the Hatatatematsu —“the flag raising pinetree.” It was at this spot that Hideyoshi raised his banner to rally the troops on the plain below and turn the tide of battle.

A wooden observation platform offers a view of the battle site to the east of the mountain. Nowadays, the view is all factories and freeways, but it’s easy to imagine hordes of samurai colliding in battle below, their cries rising up to reach even the heights of Tennozan. Another set of large illustrated panels stands nearby to assist in conjuring up this image.

Just before the final approach to the peak, the path crosses through Sakatoke Shrine. This charmingly weathered wooden hall was built to honor the god of the mountain, and reminds us of the shinto kami spirits that reside throughout nature.

A final push through dense forest and summit comes into view. This was the site of Hideyoshi’s Yamazaki Castle, a small but strategically important fort that served as a sort of watchtower for the region. Nothing remains from the castle now, but the earthen mounds of the walls and a few foundation stones hint at what once existed here.

For hikers wanting an authentic Japanese outdoors experience, be sure to pack a lunch! That’s right, it’s popular among Japanese trekkers to enjoy a meal atop a mountain. A simple sandwich or riceball will do, but you may see more adventurous hikers preparing meals and drinks.

To make the most of their time on the mountain, visitors should consider taking another route back down to see some new sights. About a third of the way down, a path on the left descends into a bamboo forest.

This leads through peaceful groves and picturesque photo spots. Visitors can make a quick detour to the historic Kannon-ji Temple (also known as Yamazaki Shoten), entering through the back gate of the temple to explore this quiet establishment. This 9th century temple may seem silent now, but in centuries past it was bustling with worshippers who came to pray for success in business.

Near the end of the trail, hikers will find welcome respite at the Asahi Beer Oyamazaki Villa Museum of Art. This pre-war European-style mansion was built by an influential business tycoon, and now houses a world-class collection that mixes Japanese folk art with modern Western masterpieces. A terrace cafe on the premises is perfect for a post-hike snack before the final walk back to Yamazaki Station. (The purchase of a museum ticket is required to enter the cafe). 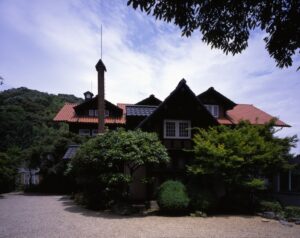 The Asahi Beer Oyamazaki Villa Museum of Art consists of the main building, which was built between the 1910s and early 1930s, and two annexes—the Underground Jewelry Box (South Wing) and the Dream Bo …

The nearest station to Mt. Tennozan is JR Yamazaki Station. It takes approximately 15 minutes from JR Kyoto Station, and the ride is free for Japan Rail Pass holders. You can also reach this hike from Oyamazaki Station on the Hankyu line.