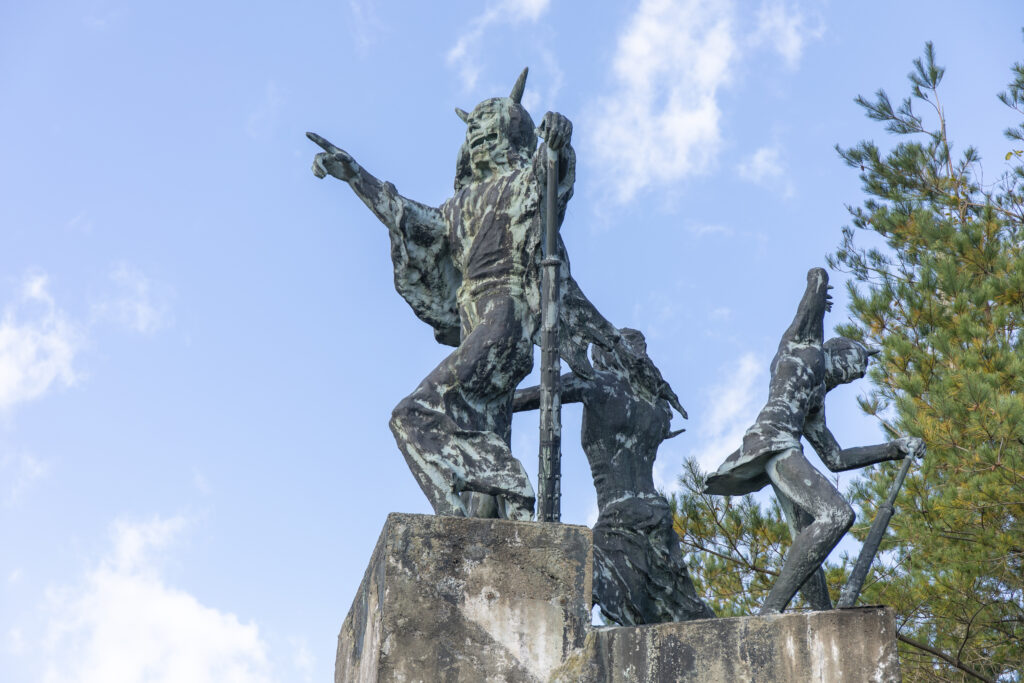 During your travels in Japan, you might have heard about oni, the demons or ogres of Japanese folklore. These mythological monsters are typically portrayed as menacing savages with horns and sharp fangs, but can also take on a gentler, more endearing persona, even appearing in children’s games. With the international release of the hit Japanese anime Demon Slayer, there’s now growing interest in oni from abroad.

What you may not know is that Kyoto has its own oni stomping ground. The Oeyama area in the northern part of the prefecture is oni country abounding with ancient oni folklore and a host of opportunities to be charmed by these devilish creatures.

Before venturing out to Oeyama, let’s take a look at how oni figure in the Japanese imagination. According to Hideki Sato, head of Japan Oni Cultural Museum in Oeyama, the term “oni” is thought to originate from an old word meaning “unseeable presence”. In ancient times when people were constantly at the mercy of nature and plagues, they feared supernatural powers, and attributed misery and misfortune to invisible, malevolent spirits. Oni as we understand them now evolved from this idea.

The popular reputation of Japanese oni as purely evil beings is, however, overly simplistic. In reality, they are much more diverse in nature. Mr. Sato explains that in the Middle Ages it was thought that oni were mortals that had been transformed as the result of overwhelming anger or sorrow. Due to their formidable strength, oni often take on a role of guardian deity that protects humans from evil, and as such play a central part in many festivals and religious rituals in Japan. The Japanese language is peppered with references to oni: the children’s game tag is called oni-gokko (literally, “playing at oni”); and there are numerous oni-related idioms—a Japanese speaker may mention “giving the oni a gold rod” (giving someone or something a decisive advantage) or “making one’s heart an oni” (hardening one’s heart), for example. Oni are inextricably linked to Japanese life, culture, and customs.

A depiction of Oeyama’s most famous oni, Shutendoji (courtesy of Japan Oni Cultural Museum and Fukuchiyama City Board of Education)

Oeyama is a mountain range that extends across four municipalities in northern Kyoto Prefecture. It’s Kyoto’s most popular mountain destination, boasting a rich natural environment of largely unspoiled forestland, and historically was the location of a major traffic route. There are three famous oni legends associated with Oeyama.

Thought to date back to around the 14th century, this is the most famous of Oeyama’s oni tales and has been made into various Noh and kabuki plays. In 10th century Kyoto, an oni by the name of Shutendoji was abducting princesses from the city and imprisoning them in his lair deep in the mountains of Oeyama. The emperor dispatched a band of oni-busters led by a samurai named Raiko to slay Shutendoji. They tricked him into drinking poisoned sake and beheaded him. The giant Shutendoji is purported to have been fifteen meters tall with five horns and fifteen eyes.

Over two thousand years ago during the reign of Emperor Sujin, the emperor’s younger brother, Hikoimasu-no-kimi, was ordered to kill a giant demon spider called Kugamimi-no-mikasa. They fought near the Yura River, and the spider ran away to Oeyama. This is thought to be the oldest Oeyama oni legend.

3. The story of Prince Maroko

In the late 6th century, a trio of oni were terrorizing the people of Oeyama. Prince Maroko was sent by the emperor to subjugate the oni and successfully defeated them. This legend has given birth to some seventy place names, temples, and shrines in the Oeyama area.

So why has Oeyama spurred so many oni legends?
Well, it’s difficult to give a definitive answer because there are several theories. Geographically, Oeyama was a frontier between two provinces. Being remote and sparsely populated, it had a reputation as a lurking-ground for bandits and other suspicious characters. There was also a mine in the area, and Oni legends are common in mining communities across Japan—it’s not hard to imagine that brawny men working among red-hot flames might have looked like oni. Another theory is that indigenous residents subjugated by a more powerful regime wove their experiences into oni-slaying stories. The folks here don’t necessarily empathize with the heroes of the stories, but often with the so-called villains. Every oni that is slayed has its own story too; they’re just not told.

Off to Oni Land!

Of course, the best way to get to know the oni of Oeyama is to go there, so we’ll introduce some spots where you can do just that.

Our first stop is Oeyama Onigawara Park, which is located right in front of Oe Station on the Kyoto Tango Railway in Oe-cho, Fukuchiyama City, the heart of oni country. The park is devoted to onigawara, or roof tiles that depict oni faces. These tiles are usually found on roofs of castles, temples, and other types of traditional architecture, where their function is partly decorative and partly to ward off evil. The roof of the gallery in the park is an impressive sight, featuring 72 onigawara made by tile artisans from around Japan. The oni theme also extends to the fountain and signboards in the park.

Don’t forget to drop by the station shop to pick up some oni-themed souvenirs. Choose from oni face masks, oni-shaped sweets, and more. The wrapping is also fun!

Access: The Hashidate Limited Express takes you directly from Kyoto to Oe in about 1 hour and 40 minutes (be sure to check the timetable as services are relatively infrequent). Alternatively, take the JR Sanin Line from Kyoto Station to Fukuchiyama Station, transfer to the Kyoto Tango Railway, and get off at Oe Station.

Japan Oni Cultural Museum in the Oeyama mountains is one of just a few museums in Japan dedicated to oni. The museum has exhibits on local folklore, oni culture and Japanese performing arts, as well as a collection of masks of devils, witches, and evil spirits from around the world. It’s fascinating to compare Japanese oni with their counterparts from other countries.

There are a number of statues in the museum grounds including a formidable 5-meter-high, 10-ton giant onigawara, and some more comical figures to remind us of the friendly side of these creatures.

Access: Take Fukuchiyama City Bus from Oe Station to Oeyama-no-ie bus stop (approx. 20 minutes). Note that the bus only operates on weekdays. Please take a taxi on weekends or holidays.

The Japan Oni Cultural Museum is appropriately located at the foot of the Oeyama mountain range, home to the most notorious “oni” (demon or ogre) in Japan, Shuten Doji. The museum explains local folkl …

About twenty-minutes’ stroll from Japan Oni Cultural Museum, there’s a small hill with a monument to three oni—one of them is Shutendoji from the famous tale. It was designed by artist Toru Narita, creator of the Japanese superhero Ultraman. Three meters tall and sitting on a five-meter-high base, the demonic trio is highly photogenic against the background of the blue sky and green foliage. In case you’re wondering, Shutendoji’s finger is pointing towards Kyoto city.

The Futasegawa Gorge at the foot of Mt. Oe is a must-see on any trip to Oeyama. Not just stunningly beautiful, the area is dotted with oni-related sites that can be explored via a walking path around the gorge. One circuit of the path takes about 30 to 40 minutes, and you’ll enjoy some soothing forest bathing along the way.

The highlight of the Futasegawa Gorge area is a giant suspension bridge called Shindoji Bridge. It affords spectacular views of the Oeyama mountain range, as well as the rushing Futasegawa Mountain Stream and unique rock formations below. The experience is made all the more thrilling by the swinging bridge!

On the right bank the path follows an old stone road that was part of an important highway connecting the seaside town of Miyazu in the north of Kyoto Prefecture with the capital of Edo (present-day Tokyo) during the Edo Period (1603-1867). It feels like an oni could jump out from behind one of the mossy rocks at any moment!

Near the bridge you’ll find Raiko no Koshikake Iwa, a giant rock on which Raiko, the leader of the posse that defeated Shutendoji, is said to have sat and rested. Why not pop yourself down here and hatch your own scheme to capture some pesky oni?

Look out for some “oni footprints” in a large rock just near Raiko’s seat. These indents are said to have been made when an oni leapt down onto the rock from the other side of the river.

A little further along is a rustic, wooden torii gate and a set of stone steps leading up to a small riverside shrine called Mitarashi-kojin Shrine. The shrine is dedicated to a mirror worn by a white dog that saved the prince in the story of Prince Maroko (in traditional Japanese beliefs, mirrors are sacred and though to be inhabited by spirits). It’s very atmospheric here—you can really feel the energy of the mountains.

Another oni-related shrine in the area is Onitake Inari Shrine (this time “oni” is in the name!) located at the eighth station of the highest mountain in the range. Shrine records say it was built by the son of the demon-spider-slayer Hikoimasu-no-kimi to honor the achievements of his father. There’s a lookout point in front of the shrine with a breathtaking view of the mountains stretching out into the distance.

There is a paved road to Onitake Inari Shrine, so the best way to get there is by car (there is no bus service). Many visitors come here to watch the famous unkai or “sea of clouds”, a phenomenon that occurs in the early mornings of autumn and winter when layers of cloud and fog form below in a mystical sight that resembles a floating sea.

After a morning chasing oni, a great place to stop for a lunch break is Shokudo Oeyama. This family-run eatery is a favorite with locals and just a short walk from Oeyama Station. The specialty is “oni soba” noodles served in a wide-mouthed drinking cup called a sakazuki (you might have seen victorious sumo wrestlers drink from a giant one of these). Restaurant owner Ms. Miyaki explains that they’re like the drinking cup used by the sake-loving Shutendoji. The visual impact of the black soba against the red dish is fantastic!

The noodles are unusually dark in color because they are made from whole buckwheat, which means they’re also more nutritious than regular soba. The broth is light and clear, so you can gulp it down like a demon!

While you’re in Oeyama, don’t miss the chance to buy a bottle of the local specialty rice wine called doburoku. It’s a traditional rustic homebrewed sake that is thought to be the precursor of the clear sake we know today. The Kehara district of Oe-cho, famous for picturesque terraced rice fields, is home to a handful of microbreweries that are garnering attention for doburoku they make from rice they grow themselves.

One of Kehara’s finest varieties of doburoku is Onibaba (“oni hag”) produced by Noriko Sato, who runs local Japanese restaurant Kappo Sato with her husband. Ms. Sato’s brew is a three-time winner of the National Doburoku Contest.

In contrast to regular sake, which is made by filtering out the rice after fermentation to obtain the clear color, doburoku is unfiltered and thus retains its cloudiness, meaning you taste the distinct umami and sweetness of the rice directly. Onibaba is acclaimed for its splendid aroma and depth. Ms. Sato does not sell her product wholesale as she prefers to interact personally with customers, so this is the only place you can try the Onibaba taste. Sounds like a devilishly good reason to include a trip to Oeyama in your itinerary!