E-bike Adventures around the Tango Peninsula 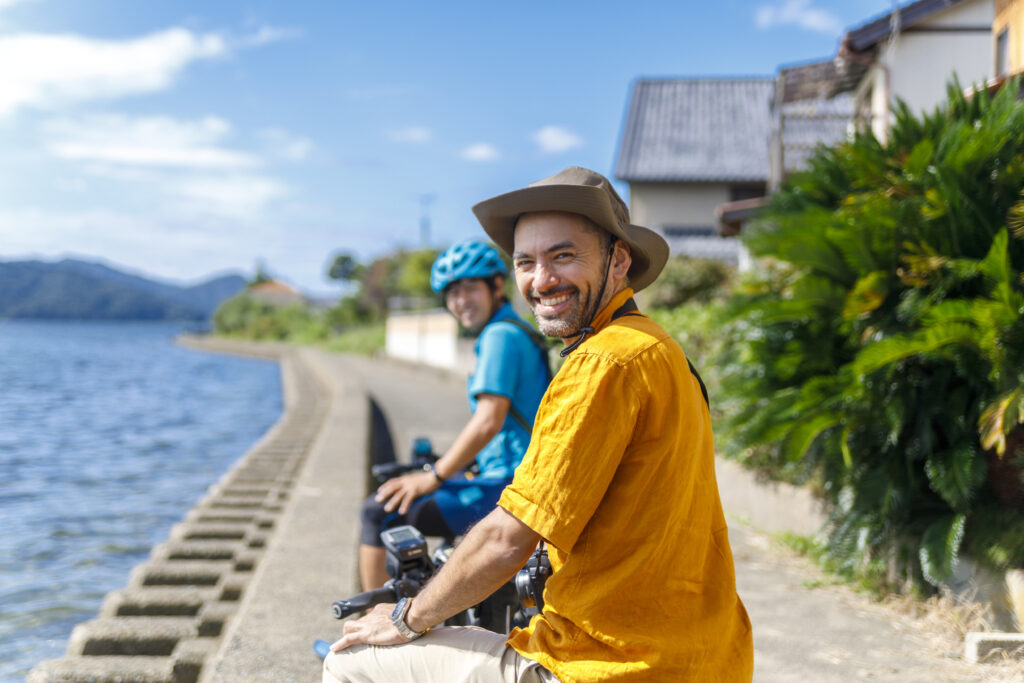 Kyoto by the Sea

To journey to the Tango area is to truly discover another side of Kyoto. Facing the emerald waters of the Japan Sea, the region is blessed with some incredible coastal scenery and has a history that predates the ancient capital of Kyoto by thousands of years. For exploring this maritime land, nothing beats the comfortable saddle of a nippy electric bicycle. With multiple rental locations, a range of e-bike models to choose from, and some excellent guided tours on offer, it’s now easier than ever to roam the area on two wheels. Read on to find out about some of the exciting cycling escapades available in the largely unexplored ‘Kyoto by the Sea’.

Kicking off to a Scenic Start in Amanohashidate

In this article, we’ll introduce you to a two-day e-bike guided tour with our bilingual guide, Kazuki (pictured in blue), from Umino Kyoto e-Bikes. On day one, he’ll take us to the coastal town of Miyazu and the fishing village of Ine and then on day two, we’ll head north in search of the scenic beauty of the peninsula coastline. After meeting up at Amanohashidate Station on the Tango Railway, we receive some basic instruction on how to operate an e-bike before setting off!

The first place we visit is Chion-ji Temple located just south of Amanohashidate. This temple was originally constructed in the 7th century and enshrines Monju, the Japanese deity of wisdom. We pray for some wisdom and blessings before moving on!

As the temple faces Miyazu Bay, we just need to cross a bridge at the edge of its precincts to get to the start of the sand bar. After we make it to the other side, the bridge starts to rotate 90 degrees! Kazuki points out this is actually a swing bridge that rotates during the day to allow the passage of large ships and foot traffic.

From here we venture through the pine-covered sand bar of Amanohashidate, which is a beloved landmark of the region and considered one of the top three most beautiful scenes in Japan. Bordered by a belt of white sand, with boats gliding through the waters on either side, this verdant-green stretch of land feels more like an island as we cycle through. The e-bikes save us some time by cutting the otherwise one-hour walk into a fifteen-minute bike ride.

Along the way, Kazuki explains that out of the thousands of pines a few have been given nicknames because of their unusual shapes, such as Meoto Matsu (Couples Pine), Nakayoshi no Matsu (Friendly Pine), and Chie no Matsu (Wisdom Pine). These pet names reveal the affection the locals have for this area and its trees.

After crossing to the north side of Amanohashidate, we eventually arrive at the Motoise Kono Shrine complex. Our guide tells us that a shrine has stood on these grounds for over two millennia. Legend has it that the shrine once housed traveling deities Amaterasu (the Sun Goddess, the most venerated deity in Shintoism) and Toyouke-omikami (the Goddess of agriculture) before the pair settled at the famous Ise-jingu Shrine in Mie Prefecture. Hence the name ‘Motoise’, which literally means ‘former Ise’.

Next we pay a visit to Manai Shrine, which is situated at the bottom of a forested mountain a short distance from the Kono Shrine complex. The stair approach to this secluded sanctuary is surrounded by trees and is believed to be centered on a divine water source which flows from a natural spring located near its entrance. Like Kono Shrine, this sacred site is also associated with Shinto myths and a decidedly mystical aura can be felt emanating from its grounds. Perhaps there really is something in the water!

Zipping along a Seaside Avenue

To connect to our next destination, we zip along a waterfront road that runs along the Aso Sea, a coastal lagoon that is separated from Miyazu Bay by the Amanohashidate land bridge.
The ocean waves and sea breeze make us wonder if this really is Kyoto! With no cars and few pedestrians, this section is great for testing out the acceleration of the e-bike!

One of the attractions along the way is a boathouse. The boathouses of Ine, which we will see later on the tour, are considered the most famous. However, some examples of these structures can also be found dotting the strip of land next to the Aso Inland Sea. With gorgeous ocean scenery literally on your doorstep, who wouldn’t want to live here; we know we would!

Next stop, a local winery? Sitting just off the Aso Sea path is Amanohashidate Winery, a small producer of wine from grapes grown in the surrounding land. If visiting in the warmer months, you can see rows of grapes growing in their vineyard overlooking the ocean with Amanohashidate in the background. We can take in the spectacular view while trying some of the winery’s white wine ice-cream. Don’t worry, it’s non-alcoholic so you won’t fall off your e-bike!

To conclude our tour of the Aso Sea, we ride towards the Aso Seaside Park to visit a nearby textile workshop, where Kazuki introduces us to the owner of Tanryo, a factory specializing in the production of a special silk crepe known as Tango Chirimen—an important material in the production of kimono. In fact, the Tango region is vital to kimono culture, having supplied Kyoto’s kimono industry with this type of silk for hundreds of years. During our brief tour, we are introduced to some of the factory’s intricate machines and how the fine emboss of Chirimen fabric is made.

After our two-wheeled wanderings of Miyazu Bay, we load the e-bikes into the support car and give our legs a brief break as we head 20km north to the fishing village of Ine.

Ine is a village unlike anywhere else in Kyoto. Surrounded by the Sea of Japan, and nestled between tree-covered mountains and luminous blue waters, the 5km stretch of coast on which the village sits is lined with 230 funaya boathouses that hug the coastline and from a distance appear to float on the water.

The surrounding waters conceal rich fishing grounds that have sustained the fishing community of Ine for hundreds of years. Sheltered from the Japan Sea by the mountains and the uninhabited island of Aoshima, Ine’s location provides natural protection from typhoons and storms, and allowed the villagers to construct their funaya on the waterfront. The first floor of the funaya is mainly used as a boat garage, while the second floor traditionally functions as a storage area, although some have been renovated into living spaces.

We’ve now built up quite an appetite and are dying to try out the local cuisine. Kazuki recommends we check out Wadatsumi, a sushi restaurant that serves seafood caught fresh from the local waters every morning. We try the Wadatsumi sushi lunch set, an elegantly presented array of grilled fish, miso soup and a generous plate of mouth-watering sashimi and sushi. It’s made all the more delicious by the stunning panorama of the bay, which we enjoy through the restaurant’s large glass windows.

In the afternoon, we take some time to explore the village. First we are taken behind one of the boathouses to try a traditional fishing trap known as a mondori. By dropping these cages into the water in the morning and hoisting them out later in the day locals can catch fresh seafood daily. These practical traps are just one example of the close relationship between the villagers and the ocean.

After cycling through the central part of the town we finally get a peek into one of Ine’s funaya. We enter a garage-like room facing the street, which is filled with a colorful assortment of fishing tackle, nets, traps, and floats. Following Kazuki to the water-facing side of the funaya we step out onto a short jetty-like walkway where our view unfolds to reveal the whole of Ine Bay. With ocean water below our feet and a row of dry squid hanging above our heads, we can really feel a sense of maritime spirit.

Our final sightseeing stop takes us to the roadside station, Funaya-no-sato. From this elevated position, we get a gorgeous panorama of Ine Bay with its boathouses lining the shore and a forested island to the south surrounded by turquoise waters. It’s a breathtaking scene and allows us to see some of the terrain we covered during the day.

Soaking up the Local Life: a stay at a local inn

There are a number of lodgings in Ine (some are renovated funaya houses) but our guide recommends Funaoto, a charming little inn renovated from a 75-year-old fisherman’s house that sits just in front of the local port. The hospitable owner Jun, fluent in Chinese, English and Japanese, offers some local activities, such as a fishing port tour and cooking classes using freshly caught fish. They’re a great way to immerse yourself in the local culture.

Day 2: Into the Wild Tango Peninsula

After staying overnight in Ine, we follow our guide and venture further north to the edge of the peninsula. Exploring the meandering coastline is made easy thanks to the support car of Umino Kyoto e-Bikes, which also allows you to conveniently return the bicycles at your final destination. The northern coast is a wild paradise that forms part of the San’in Kaigan UNESCO Global Geopark and features ancient rock formations that date back millions of years to when the Japanese archipelago separated from mainland Asia.

For thousands of years people have lived, worked and grown crops along this Peninsula’s northern fringe, making use of the land between the steep mountains and the ocean. We can see how this land has been used by locals at a set of beautiful terraced rice fields that also commands an unbridled view of the ocean horizon.

Punctuated by rocky shores and forested capes, the scale of the landforms along the northern fringe of the peninsula is immense. In particular, we find some striking scenery along the section called the Kamaya Seacoast where there are incredible vistas of the azure sea and jagged coastline at the feet of towering cliff faces. There are a number of lookout points for taking in this awe-inspiring scenery, however the tour operator recommends a downhill course as the most exhilarating way to enjoy this ancient natural heritage.

After a long day of cycling, we take a warm bath at Ukawa Onsen located in Kyotango City. The establishment sits on a hilltop and boasts a magnificent view of the Japan Sea from its spacious indoor and outdoor baths. The facilities also include a restaurant and overnight accommodation, as well as a charging station for e-bikes.

Our final stop on the bike tour takes us to the Onaru Burial Mounds, a series of 13 tombs dating back to the 6th-7th century, located along the San’in coast. The tombs are believed to be the legacy of the powerful Tango Kingdom which at one time flourished as a window of technological and cultural exchange with the Asian continent and the Korean Peninsula.

Standing just offshore, we can also see one of the most impressive landforms of the region from this spot. Emerging from the sea to a height of 20m, Tateiwa Rock is a volcanic monolith of columnar strata that is believed to be 15 million years old. We are lucky enough to catch a magical sunset over this ancient stone landmark, which provides the perfect closing scene to our e-bike tour.

The northern coastline of Kyoto echoes with a history that goes back thousands of years and offers many opportunities for exploration. If you’re looking for a new adventure in Kyoto, why not tour the region by e-bike and see all the wonders of the Tango Peninsula for yourself?